Showing posts from July, 2015
Show All

Prayers for the nation and Pride - Caribbean IRN Update June 2015 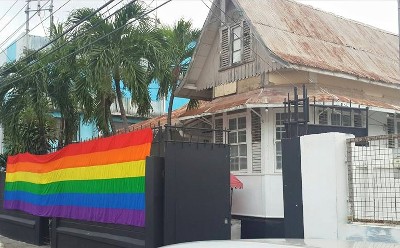 Pride Flag at Big Black Box formerly Bohemia, Woodbrook, Port of Spain, TT Image from Shane McCutcheon Kaieteur News in Guyana recognises gay citzenship in an editorial  calling for Divine Intervention in Guyana saying that "Let the familiar adage of “one hand washes the other” continue to ring true. Gay man, straight man, every man, every woman and child from every race or ethnicity; let us unite like we do in times of disaster and pray for our leaders to lead the country in the right path. " Caribbean newspapers wrote editorials related to the Same Sex marriage ruling in the USA.  The Jamaica Gleaner wrote A Matter of Fundamental Rights , In Trinidad & Tobago, The TT Express talked about The Right to Be Gay  and the TT Guardia n was more measured. Guyana Times  seems to lament that "The debate in Guyana on LGBT rights has lagged." as activists and advocates and others called fo r Visibility and Inclusivity on LGBT issue s. Other Caribbean
Post a Comment
Read more
More posts