By caribbeanirn - October 31, 2014
Suriname saw the celebration of Coming Out Week organised by LGBT Platform of Suriname.

Suriname was the venue for the Second Women and Sexual Diversity Conference For LBT Activists .  Paige Andrew writes about her experience at the conference.

There is an announcement that US NGO Human Rights Watch will be visiting Suriname in 2015  though not for Coming Out Week.

How are Caribbean men dealing with diverse sexualities?  Richie Maitland from Grenada talks about being a straight man involved in LGBT activism; and UNAIDS in the Caribbean releases the results of the Caribbean Men's Internet Survey

The UNAIDS Caribbean Vimeo channel has videos which summarise the results.

Meet the men of CARIMIS from UNAIDS Caribbean on Vimeo.
CARIMIS is the largest study of men who have sex with men in the Caribbean and the first to be conducted online. Meet the men and find out what you might have in common with them.

UNAIDS also released the results of a survey in Trinidad & Tobago which indicated that there was high tolerance of homosexuals in the country. 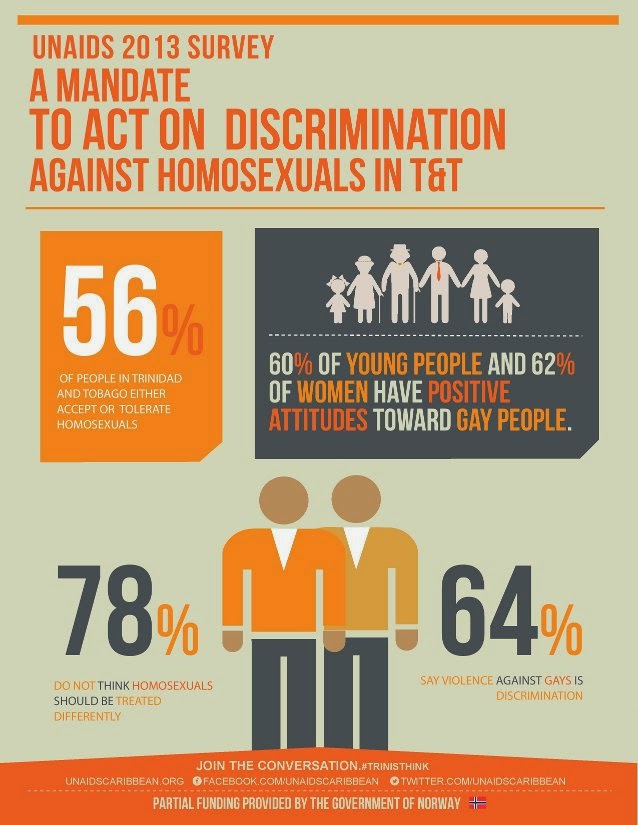 In Jamaica, a poll suggests that the majority of Jamaicans want to keep the buggery laws.


In Grenada, Groundation Grenada did a presentation to expand the anti-discrimination clauses in the Grenada Constitution to include protections for vulnerable groups including LGBT citizens.  The news item from CC6 has some relevant discussions

On other law  matters , there is a report that the  CARICOM Secretariat has applied to present arguments in the case brought by  Maurice Tomlinson in his challenge to the immigration laws of Belize and Trinidad & Tobago .

In Guyana, Guyana Trans United continued its vigilance to ensure justice after the attacks on trans persons earlier in 2014

Extract from EL MATRIMONIO Y LA UNIÓN DE HECHO AFECTIVA COMO FUENTES DE CONSTITUCIÓN DE LAS FAMILIAS Changing costly laws  4.2 billion US Dollars is the cost of homophobia in the Caribbean according to a study published by Open for Business Caribbean.  Guyana Trans United organises a panel led by Candacy Gulliver McEwan, Alessandra Hereman ,  Annie Megnauth and Kenny Harrinarine to talk about the recent removal of the 'cross dressing' laws from Guyana's books and the impact on transgender lives in Guyana.   CAISO launches " Finding an Equal Place at Work : A Model LGBTI+ Workplace Policy for Trinidad & Tobago" In Cuba, version 22 of the draft Family Code opens up the definition of family to include families with same sex partners and unions of persons regardless of gender. The IOM publishes the "Guyana Needs Assessment on Migration Governance " i n which they note that "LGBTIQ+ migrants in Guyana remain in a vulnerable state as they are crimi
Read more